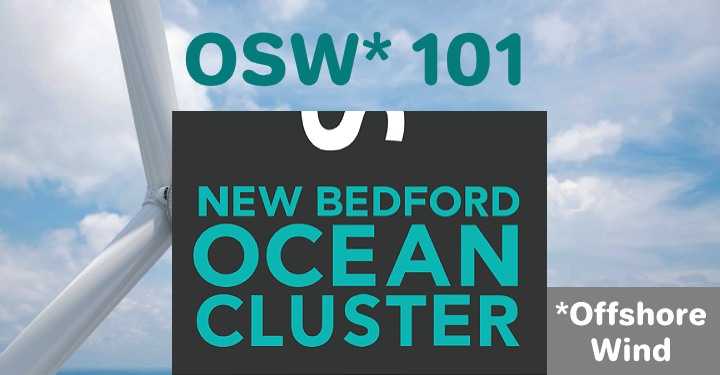 By Steven Froias | For the New Bedford Ocean Cluster

There has been a lot of excitement in the greater New Bedford region – and beyond – since the steady stream of great news about the growing momentum of the offshore wind energy industry in this city and, indeed, in the United States.

Yet, the New Bedford Ocean Cluster recognizes that it can be hard to wrap your brain around all these new bright shiny objects at once. Especially when an entirely new industry arrives with an entirely new vocabulary.

No worries. We’re here to help.

From time to time, we’ll compile and share with you the terminology you need to know. Never enough to drag you under, but just enough to keep you afloat as this new chapter of maritime history unfolds.

Now, some of the lingo and jargon may be second-hand to folks who already work in the industry or have read up on the subject. But we’re guessing that just as many more have no idea what, exactly, is the Jones Act. Or what GWO stands for.

Neither did most of us until we got involved in the promise of renewable energy. Now that it’s happening right from our own shores, in fact from the very Port of New Bedford and the New Bedford Marine Commerce Terminal, it’s time we share the love.

So, we’ll begin with a few words or terms regarding Offshore Wind – frequently abbreviated to OSW – to get you aloft and blowing in the wind. We’ll add more in future posts and eventually compile them all together into the #NBOC glossary on this website – the first of many resources you can expect to see going forward.

THE JONES ACT: Has nothing to do with Davy Jones Locker – but everything to do with keeping ship building in the United States strong. The Jones Act requires that all vessels carrying goods between two U.S. points be American-built, -owned, -crewed and -flagged. In the OSW industry (see what we did there? Hope you were paying attention above!) the Jones Act means purpose-built vessels in the U.S. to help facilitate the construction of OSW farms.

GWO: It’s not something stamped on organic food to certify that it is non-GMO. (That’s Genetically Modified Organism.) Rather GWO refers to the offshore wind training certificate you receive after a course of study. It stands for Global Wind Organization, a group of industry experts who, since 2012, has set the standard for people working in the wind industry, both onshore and offshore. You can, in fact, become GWO certified with Bristol Community College’s National Offshore Wind Institute (NOWI) program.

INTERCONNECTION: Though it sounds like the title of the latest Chris Nolan blockbuster, you won’t find Leonardo DiCaprio becoming interconnected. (That would be “Inception.”) For offshore wind generation projects, interconnection involves the transport of electricity generated offshore to onshore landings, known as points of interconnection (POI).

INDEPENDENT SYSTEM OPERATOR: From a POI, electricity is injected into the grid, which is operated by an Independent System Operator (ISO). That’s an independent and federally regulated entity that coordinates regional transmission to ensure non-discriminatory access to the electric grid and a reliable electricity system.

We’ll stop here before we all begin to feel a bit like Leo in Inception. Upside down and turned all around, not unlike an offshore wind turbine blade!

Until next time, go forth and impress your friends and family with OSW cocktail chatter, courtesy of the New Bedford Ocean Cluster.

The New Bedford Ocean Cluster (NBOC) is a newly established 501(c)(3) non-profit organization created to serve the maritime business community in the greater New Bedford region. The NBOC’s mission is to leverage New Bedford’s coastal position, marine knowledge base, and landside capacity to drive employment and wealth creation for New Bedford residents. This shall be done through a dynamic approach combining recruitment of targeted businesses, creation of unique economic infrastructure, workforce development, and support for homegrown ocean economy companies.

The New Bedford Ocean Cluster will seek to enhance the City and Port of New Bedford’s existing strengths in maritime industries, while advancing new programs, start-ups and technology partnerships with a primary focus in four different industry areas. These four industry areas include: Commercial Fishing and Processing, Aquaculture, Offshore Renewables, and the Innovation & Technology Sector. The NBOC was originally formed in 2015 as a program of the New Bedford Port Authority. In 2019, the NBOC merged with the former New Bedford Wind Energy Center, which focused on business development in the offshore wind industry.

NBOC President John Bullard had this to say about the organization and his role within it, “I have often said you can describe New Bedford in one word: seaport. We send our people to sea. The mission of the New Bedford Ocean Cluster is to build on that centuries old relationship to create economic opportunity for future generations by building on our dominance in commercial fishing, leading the way in offshore wind, breaking new ground in marine technology, and joining the fast growing field of marine aquaculture. These four fields and the relationships between each of them create the potential for thousands of local jobs that pay well and that involve every segment of our diverse community. I am honored that Mayor Mitchell invited me to serve on this mission for New Bedford’s future. We have a dynamic Board with world class expertise in all the fields where we will operate and I am humbled to have been asked to lead them.”

Mayor Jon Mitchell serves on the NBOC’s Board of Directors in an Ex Officio role, stated, “The NBOC will be instrumental in ensuring New Bedford achieves its full potential as a leading maritime center. We seek to capitalize on our advantages in fishing, offshore wind and other industries so that we can create new and sustainable opportunities for the residents of our region. ” 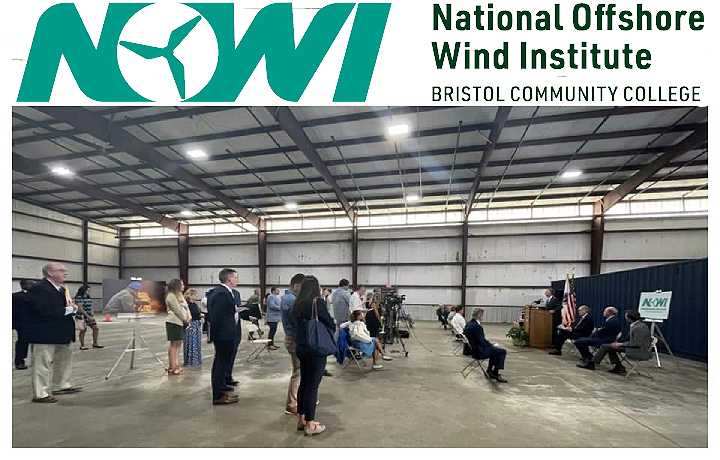 Though the facility is aways from being operational, BCC isn’t wasting any time entering the offshore wind training field of study.

Indeed, beginning on August 11, 2021 it will be offering online Offshore Wind Orientation classes.

“This 2-day, 4-hour class (8am-10am) is aimed at those looking to understand more about the sector, with the intention of becoming part of the supply chain, or for satisfying general interest in this emerging industry.

“Equally, the course aims to provide students with a broad vocabulary of offshore wind and the confidence to engage with offshore wind professionals in a coherent manner,” the school states.

BCC notes that, even as NOWI is being built out, it is important to begin instruction now. The orientation classes are a prerequisite to all other Offshore Wind classes. Therefore, they have scheduled an opportunity roughly each month through December to take the two-day, four hour class. (You can register for each and learn more AT THIS LINK.)

As Vineyard Wind Manager of Workforce and Supply Chain Development Jen Cullen says, “The training that they are offering here, we will absolutely need for the workforce that we’ll be sending onshore. We’re looking really to train as many locals into the workforce as we can.”

BCC cites these statistics in the course offering: The U.S. Department of Energy forecasts the industry will employ 43,000 people along the East Coast by 2030, and as a result, will create thousands of jobs in southeastern Massachusetts, providing area residents career opportunities in the emerging 21st-century global economy. “

So, while NOWI is being built at 198 Herman Melville Boulevard along the New Bedford waterfront, you can start building your offshore wind credentials beginning this summer and fall. The classes are instructed by Dr. Alan Lowdon, Director of Strategic Development for NOWI. And once again, you can register AT THIS LINK.