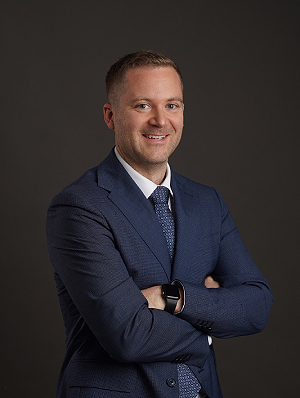 NEW BEDFORD, MA (Via City of New Bedford news release) – Justin Poulsen, an experienced maritime professional with significant experience in maritime transportation, logistics, and economic development, has been selected as the next Executive Director of the New Bedford Port Authority.

Poulsen was selected by the Port Authority commission from among a pool of more than 75 applicants. Former Port Director Ed Anthes-Washburn resigned in February to accept a position in the private sector.

Poulsen has nearly two decades of experience in the maritime industry, and currently serves as Vice President and Executive Director of PortNYC for the New York City Economic Development Corporation, where he oversees PortNYC’s portfolio of assets, including Manhattan and Brooklyn’s cruise terminals, rail, aviation, freight, offshore wind assets, and the DockNYC program. In that role, he is responsible for leadership of the department’s goals and priorities, including project management, economic development and port policies, and working closely with state and city organizations on planning and strategy for the port.

He previously served in several leadership roles, including as Vice President for Strategic Pricing and Itinerary Planning for Silversea Cruises, guiding strategic planning and product development, overseeing planning and logistics, as well as business planning and strategy. He also managed pricing, deployment, and itinerary planning for sectors of the Holland America Line, and before that managed operations for towboat vessels in Seattle, Washington.

Poulsen received a Bachelor’s degree in Marine Transportation from the California Maritime Academy, and an executive Master of Business Administration from the Graduate School of Business of Politecnico di Milano in Milan, Italy.

“I’m pleased to welcome Justin Poulsen to the Port of New Bedford,” said Mayor Jon Mitchell, Chairman of the New Bedford Port Authority. “He will bring broad and deep experience in maritime transportation, planning, and economic development that will enable him to hit the ground running as Port Director.”

“I am thrilled to join the New Bedford Port Authority as its next Executive Director, leading an outstanding organization with a very distinguished history and extremely bright prospects for the future,” said Justin Poulsen. “I want to thank the Commissioners for their trust, and I am excited to get to work with the dedicated team to ensure the Port continues to attract business from across the globe by offering world-class services and infrastructure.”

About the New Bedford Port Authority

The NBPA (formerly Harbor Development Commission) was created by the Massachusetts General Court under Chapter 762 of the Acts of 1957 as an autonomous body charged with managing the Port of New Bedford – America’s top commercial fishing port, home port to more than 500 commercial scallopers and fishermen, staging site for the first offshore wind project in Massachusetts and a center of the nation’s emerging offshore wind industry, and one of a few marine industrial working waterfronts on the East Coast.

Chaired by the Mayor, the Port Authority’s Commission consists of seven members as appointed by the Mayor and approved by City Council. The New Bedford enabling legislation gives the NBPA the authorities of the harbormaster and the responsibility to manage commercial and recreational vessel activities over all the waters within the New Bedford city limits. The crucial day-to-day operations and decision making is the responsibility of the NBPA staff headed by an Executive Director.

The NBPA manages all City-owned waterfront property, including Homer’s, Leonard’s, Steamship, Coal Pocket, and Fisherman’s Wharves, as well as a 204-slip recreational marina at Pope’s Island and 19 real estate assets. The NBPA also assigns moorings and enforces rules regarding use of piers, wharves, and adjacent parking areas under its jurisdiction, and issues permits for harbor events and for use of city-owned waterfront facilities.